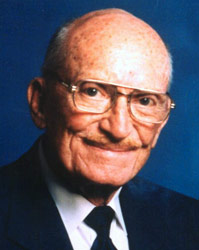 Ralph Cloward is credited for the technical innovation of posterior lumbar interbody fusion or PLIF.

Following the report by Mixter and Barr in 1934, discectomy became a standard operation for sciatica due to a ruptured intervertebral disc. Ralph Cloward’s philosophy went against the prevailing treatment for lumbar disc herniation, and he believed that a discectomy did not address low back pain. The removal of nucleus pulposus led to instability of the motion segment that caused the back pain. In 1944, he audited his patients that were operated for a ruptured disc with a discectomy. Out of 162 patients, 70% had symptoms related to the surgery (back pain or recurrence of sciatica) and 20% subsequently had a fusion surgery. He initially tried a posterior fusion, as described by Hibbs, but was not satisfied with the results due to pseudarthrosis.

Cloward performed the first PLIF in 1943

“The operation of vertebral body fusion devised by the writer consists of a subtotal removal of the intervertebral disc, including the cartilaginous plates, through a partial bilateral laminectomy. The cortical surfaces of the vertebral bodies are removed with a chisel and three or more large full-thickness bone grafts obtained from the iliac crest are driven forcibly into the interspace.”

“It is true that many patients apparently remain asymptomatic for a long time following a simple disc removal. But others with exactly the same clinical picture may continue to have incapacitating low-back pain and/or develop a recurrence of the sciatica within a short time after the operation. Because of this difficulty in determining which operation a given individual may require, I have made my treatment uniform for every patient. Based on the thesis, “once a ruptured disc, always a ruptured disc,” a vertebral body fusion has been done in practically every case of ruptured lumbar disc operated upon since 1944.”

Today, we may disagree with his indications for performing PLIF, as we have become more selective in our indications for spinal fusion. Cloward also maintained that the patients with compensation claims did better with PLIF compared to discectomy.

“The most gratifying group of patients treated by this operation has been that of the industrial accident and insurance cases. It is the experience of all surgeons who do disc surgery in industrial cases to expect long periods of postoperative convalescence with the patient drawing compensation. If and when the case is closed, there is usually a fairly large settlement for permanent partial disability. My experience with the vertebral body fusion in compensation cases has been much more gratifying.”

The claims made by Dr. Cloward made him quite controversial, and he met with significant resistance and criticism throughout his career. When he presented his series of first 100 cases at the Harvey Cushing Society Meeting and reported a 94% success rate, the paper was received with disbelief and incredulity. James Watts, a neurosurgeon from Virginia, commented, “We are neurosurgeons, and as such we should restrict our activities to the trephine and the rongeur, and leave the hammer and the chisel to the orthopaedic surgeons”.

Later, as evidence accumulated, surgeons realized the benefits of this operation. The technique was eventually accepted and remains popular to this day. Dr. Paul Lin wrote, “Dr. Cloward was so far ahead of his time in technical skill that he made others appear inferior.”

The PLIF was a revolutionary technical innovation and changed the course of spine surgery. 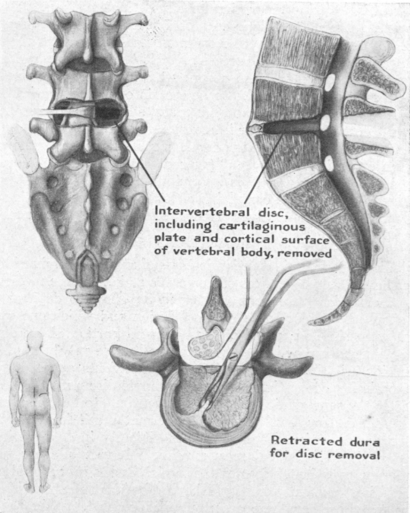 The essential steps of Cloward’s PLIF are